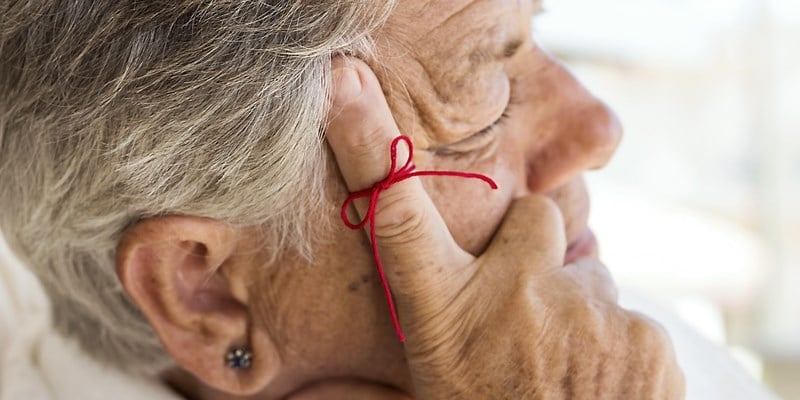 My grandfather spent the last few years of his life confined to a bed seemingly oblivious to the world around him. I wonder what he experienced lying there all day. He died at 90.
My father experienced the last few years of his life lost in the darkness of dementia unable to function as he had most of his life. Over the span of 5-6 years, his memory, along with thinking and communication skills, gradually diminished. He died at 86 (due to heart issues).
I have every reason to believe that I will also spend the last years of my life with greatly diminished brain function. OK. I can hear you laughing. It’s probably already happening, I’ll admit.
[featured-image single_newwindow=”false”]
What can I do now that will actually help me when this happens? Puzzles? Memory games? Medications? Healthy eating? Exercise? How about learn interior prayer? Huh?
This may sound weird, but the real prospect of developing dementia is one practical reason why I’m trying to develop an ability to commune with God from my heart verses thinking about God with my brain. I want to know God in and from my heart so that when my brain ceases to function properly, I can still have a vibrant, deepening relationship with God. Does that make sense?
This kind of treatment for dementia would include a united heart, mind, and soul in unity with the Trinity. When the brain no longer “works,” communion with God can continue. There is no cure for dementia. However, this may be the way for Christians to keep experiencing God no matter their physical and cognitive limitations.
Explore this in light of what St. Paul writes in 2 Corinthians 4.16-17: So we do not lose heart. Though outwardly we are wasting away, yet inwardly we are being renewed day by day. For our light and temporary affliction is producing for us an eternal glory that far outweighs our troubles.
In other words, outward afflictions manufacture inner flourishing in God’s grace. Place loss of brain function as an outward affliction (it is when compared to the soul/heart), and you can see where motivation to develop inner communion with God comes from. Constant inner renewal produces unending splendor now and forever. The brain can’t stop that from happening.
Dementia
Dementia is described not as a specific disease, but as a group of conditions characterized by impairment of at least two brain functions, such as memory loss and judgment.
Symptoms include forgetfulness, limited social skills, and thinking abilities so impaired that it interferes with daily functioning.
The Alzheimer’s Association website reports…
While symptoms of dementia can vary greatly, at least two of the following core mental functions must be significantly impaired to be considered dementia:

People with dementia may have problems with short-term memory, keeping track of a purse or wallet, paying bills, planning and preparing meals, remembering appointments or traveling out of the neighborhood.

Many dementias are progressive, meaning symptoms start out slowly and gradually get worse.

Treatment of dementia depends on its cause. In the case of most progressive dementias, including Alzheimer’s disease, there is no cure and no treatment that slows or stops its progression.

A Spiritual Treatment
Since there is no physical cure or treatment that stops the progression of dementia, an alternative approach needs to be explored. How about a spiritual one?
Would it be possible to spiritually circumvent the brain allowing our heart to control our life?
Could we ever come to the point where our mind and heart are so united that we could function well even though our cognitive faculties are diminished?
Here’s what I’m thinking (while I can ????): Let the prospect of dementia work in your favor – learn to know God from your inner being not your brain. Know God not as an idea you think about but as a person with whom you relate, heart to heart. Learn to relate in silence and quiet since that’s probably where you’re headed. Learn to commune with God from within your heart.

St. Paul encourages his son Timothy to train himself in godliness because godliness, compared to physical exercise, is good for now AND eternity (1 Timothy 4.7-8). Godliness is not primarily a thinking process. It is possessing the heart of God. And, surprisingly, our interior being only develops through intentional, bodily training.

In C. S. Lewis’s Screwtape Letters, Uncle Screwtape chides his understudy demon, Wormwood, for allowing his “patient” to become a Christian. But take heart, he says, “There is no need to despair; hundreds of these adult converts have been reclaimed after a brief sojourn in the enemy’s camp and are now with us. All the habits of the patient, both mental and bodily, are still in our favour.” Screwtape knows that if a convert’s habits remain the same they will experience little of life in Christ.

Later, Screwtape advises Wormwood how to effect the prayers of his “patient” by keeping them spontaneous, informal, unregularized and definitely without using the body. “At the very least, they can be persuaded that the bodily position makes no difference to their prayers; for they constantly forget, what you must always remember, that they are animals and that whatever their bodies do affects their souls.”

That’s what I’m talking about….training the heart, soul, and spirit to be like God so when the brain malfunctions, we can still flourish in knowing God. (According to Jesus, this “knowing” is actually “eternal life”  – a God-life we can live now and forever; see John 17.3).
What bodily exercises are good for your spiritual being? Start with the basics and let them teach you about God and yourself. (Here’s what’s fun: You can do these even with limited brain function.)
Prayer – learn to commune with God 1) in silence: with a quiet mind and attentive heart and 2) liturgical prayer: as Jesus taught his disciples and as has been practiced by Christians for 2000+ years.
The Jesus Prayer, “Lord Jesus Christ, Son of God, have mercy on me, a sinner,” is a time-tested way to commune with God at all times. I’m training myself to continually say this prayer so that it becomes the prayer of my heart. It will then be the primary means of communing with God when I have dementia. Thanks be to God!
Fasting – learn to commune with God by pulling away from activities that distract your heart so that you grow in experiencing God’s love with your whole heart, mind, and spirit.
Almsgiving – learn to commune with God by dispossessing your stuff, including money, and giving to those in need. With actions of sacrificial giving you develop a heart like Jesus who always lived like this.
Sometimes during my father’s last years on earth, we would sit together on a small bench outside his apartment. There he’d commune with God in creation watching birds fly and feeling breezes blow. He’d notice these same things every time and comment on them as if he’d experienced them for the first time. In sweet childlikeness, he simply experienced God. I wanted more for him and, to my shame, from him. Yet, he was content. God was enough.
I am not happily looking forward to years of living with dementia. I’m actually not going to have much say in the matter. Yet, I never want to stop experientially knowing God no matter how fuzzy my brain becomes. I don’t even know if what I’m writing about will “work” then. It doesn’t really matter. It’s working now. I’ll just plan on it working later as well.
What do you think about my proposal? Share your thoughts below.
Dr. K
P.S. The best book I know to introduce yourself to this kind of praying is Prayer of the Heart by George Maloney. It’s pure inspiration for the serious inquirer.

6 Comments on “Can The Possibility of Dementia Be Motivation For Developing Inner Prayer?”