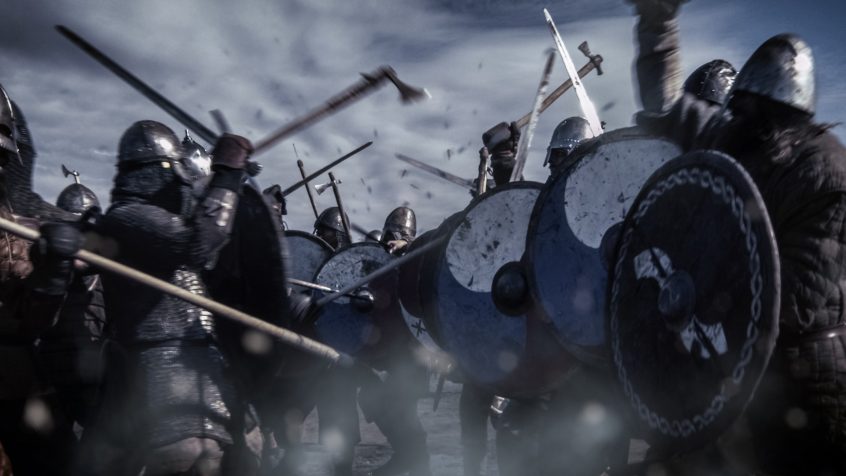 Wednesday morning, during the intercessory prayer portion of my time with God, the names of three couples jumped off the prayer list. They are all former church leaders (pastor, elder, deacon) all securely married two years ago, who are now divorced or going through a divorce. God’s mercy can be experienced whether married or divorced. However, I know each of these couples and their situation well. In each case the passions have wreaked havoc on their lives – greed/love of money, lust, anger, pride, vainglory. Perhaps if they had learned to battle these “little demons” within themselves they’d still be happily married.

The passions need to be taken seriously.  Whether you are aware of it or not they are wreaking havoc on your life, negatively impacting you and your relationships.

In this post, I provide a VISION of life unmoved by the passions, a picture of your life when you learn to battle the harmful desires of your heart and direct your passions to virtuous ends. I present this not because I live a dispassionate life. I too am a fellow-pilgrim struggling with desires disjointed from Christ’s own. Yet, I want you and me to be more like Jesus. Though possessing the same desires as every human being, Jesus never sinned by letting them control him. He was always the master of his passions. I want that for you…and me.

The state or condition of not being controlled by the passions is called “dispassion.”

In classical Christianity, dispassion is a primary goal of the Christian life. It is victory in the battle with the passions.

Dispassion does not equal no passion or getting rid of the passions. It means to master them in such a way that they have no power over you to make you sin. Dispassion is the warm glow of a fire contained and useful contrasted with an out-of-control, blazing inferno ravaging everything in its path.

Basically, dispassion is “freedom from passion” (in the context of communion with the Triune God).

Theologian Dumitru Staniloae reminds us that dispassion is not a negative state “because the absence of evil can’t be considered as such.” But, dispassion “is a peaceful condition of the soul” (St. Maximus).

St. Isaac the Syrian (613-700) writes: “Dispassion doesn’t mean to no longer feel the passions, but to no longer accept them.”

Diadochos of Photiki (400-500) adds: “Dispassion doesn’t mean to be no longer attacked by demons, because then we would have to leave this world, according to the Apostle (1 Corinthians 5:10), but being attacked by them, to remain unconquered.”

So, dispassion is the condition of soul in which it defeats every temptation. This kind of soul also lives in godly virtues where love is preeminent. (The journey of these virtues is a topic for other posts.) You might say that dispassion is the highest of virtues since it means complete mastery over the passions through full participation in the life of the Trinity.

By dispassion I mean a heaven of the mind within the heart, which regards the artifice of demons as a contemptible joke. A man is truly dispassionate – and is known to be such – when he has cleansed the flesh of all corruption; when he has lifted his mind above everything created, and has made it master of all the senses; when he keeps his soul continually in the presence of the Lord and reaches out beyond the borderline of strength to Him. And there are some who would claim that dispassion is resurrection of the soul prior to that of the body, while others would insist that it is a perfect knowledge [experience] of God, a knowledge second only to that of the angels.

How beautiful would it be to live such a life.

Renunciation: The First Step Towards Dispassion/Freedom from Passion

What we learn from classical Christianity and the ancient writers is that our lives can be purified in relationship to the passions. According to St. John Climacus, this purification begins with “renunciation” of the world. This purification continues with “detachment” and “exile” while building godly virtues into our lives.

Every Christian is called to a life of renunciation. Listen to the words of Jesus Christ:

If anyone desires to come after Me, let him deny himself, and take up; his cross and follow Me. For whoever desires to save his life will lose it, but whoever loses his life for My sake will save it (Luke 9.23-24.

In other words, renunciation is innate to being a Christian. We are to renounce everything for Christ, for his sake and for our journey in him.

We are called to renounce the world – its systems, values, people, conduct – everything that is opposed to Christ and to our life in Christ. We are to reject a worldly way of life – the pursuit of wealth, vanity, pride, and carnal self-pleasure. We are to break with the world in terms of what we hold dear (and what holds us!) and what makes up the center and focus of our lives.

We are not born worldly. We become worldly over time, as we “grow up.” Our innocence is lost while we cave to the pressure to conform to the world. It happens to every one of us, of our own choosing or in subtle ways we don’t see.

Yet, the Kingdom is only occupied by children.

“God wants us, though grown up with adult minds, having knowledge, wisdom, and understanding, to be like children: ‘Unless you are converted and become as little children, you will by no means enter the kingdom of heaven’ (Matt. 18:3).” (Vassilios Papavassiliou, Thirty Steps to Heaven, pp 21-22)

This same writer reminds us that “Christians renounce the world by living for something other than the world. By living thus, we become the light of the world” (p. 22) and “have a powerful role to play within society by living a Christ-centered, not a world-centered, life” (p. 23).

No Need to Become a Monk

The arenas in which you and I live this life of renunciation are the home – married or not, parent or child – and the public theater – work, neighborhood, society, church, school.

When St. John Climacus was asked how those who live in these arenas could be separated from them, he replied:

Do whatever good you may. Speak evil of no one. Rob no one. Tell no lie. Despise no one and carry no hate. Do not separate yourself from the church assemblies. Show compassion to the needy. Do not be a cause of scandal to anyone. Stay away from the bed of another, and be satisfied with what your own wives can provide you. If you do all this, you will not be far from the kingdom of heaven.

In other words, behave as if you’re living in the heavenly kingdom now, because you are. In the Kingdom, Jesus Christ is the focus of all activity. By constantly turning to Christ you automatically turn from the world.

You don’t need to literally separate yourself to a convent or monastery. Yet,  you can have a little monastery in your own heart, a heart fully devoted to God, unaffected by the world.

Where in your life is the world impacting you? Finances? Politics? Health? Your understanding of relationships? Your marriage or singleness? The way you do your job? Your views on sex? Be honest with yourself and acknowledge what is real. You may have adopted the values of a secular business, entertainment, or political culture more than you realize.

What needs renouncing in these areas? What decisions do you need to make to transition from worldly understandings of these areas to more Christ-oriented ones?

How can these areas be “sanctified,” brought under the energy and life of Christ? At least begin by asking the Triune God to help you make this transition.

The state of dispassion is ahead of us on our spiritual journey. We will always be striving towards this state and battling the passions which are trying to prevent us from getting there. Christ is the goal and the endowment as we journey God-ward into dispassion. He urges us on as we walk in him. The journey is worth every step.

Why write about a topic so unfamiliar to modern-day Christians?

I want to update you on my own battle with the passion of anger towards Eric which I raised in the last post. Having anger exposed in me last week, I acknowledged its hold on me, confessed it to God and then to my pastor (James 5.13-16) Saturday night. Forgiveness was given and experienced and the healing of my soul began. I could sense an inner peace while wondering what my next interaction with Eric would be like.

Last night (Wednesday) he and I worked together in the church service. I was amazed at my freedom from judgment and resentment as I sincerely received his help and he mine. I’m quite sure I’ve never experienced such a noticeable shift in heart and attitude towards someone like this. Could it be that the angry resentment was being replaced by sincere love? I hope so. All I can say is that battling this passion and participating in God’s merciful process, has helped in the healing of my soul. Thanks be to God!

2 Comments on “Battling the Passions Towards Victory: Dispassion”